I want to say it’s officially spring, but I don’t dare considering the horrendous weather of February and March! However, it is APRIL which marks the approach of my wedding anniversary (thankfully the weather was better back then!) When I got married, we didn’t have a great deal of money, so what I could do/make myself, I did and I thought I’d revisit those craftings for your blog-reading pleasure.

I did the usual things – invites, table settings – all the paper based stuff, myself. That was easy enough to do. I also decided I’d make my daughters’ bridesmaid dresses myself, which saved me a chunk of cash. They actually turned out really quite nice. There’s a photo of my eldest spinning around in hers (she was still quite little then), with her skirt flaring out – it’s really lovely, though my youngest was a much better poser with her flowers always held in the perfect place for every photo.

Anyway, memories aside, the biggest under-taking was the wedding favours. Early on in our relationship, we were out for a meal with friends and my partner started fiddling with the cork cage from a cheap bottle of fizz. After a few minutes he produced a tiny chair made from the wire! I started collecting them (he’s a fiddler), each with different style backs and arms, depending on what he felt like making. I asked him where he got the idea to do it. I don’t know if any of you have ever seen the movie The Fisher King – if you haven’t, you should – Robin Williams is wonderful. One scene involves his character making a chair in the same way during a dinner. We thought the wedding favours should be about both of us, so he made 60 of these chairs and I sat with teeny scraps of material and embroidered each person’s initials on them, which I turned into miniature seat cushions. 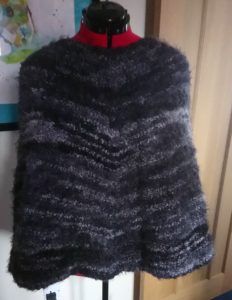 I had disposable cameras out for the guests – we sure did get some interesting photos of these favours in some odd places! It was probably the thing I liked the best about the final look of the room – these tiny chairs in front of the normal sized ones.

It was such a lovely day which went by far too fast. We like to celebrate our anniversary by giving thoughtful gifts – we’ve done craft courses and all sorts. This year, I’ve been working on the other insane project that I’ve mentioned in earlier blogs – yet another poncho! Just about got this finished in time, so hope it goes down well.

I’m best described as a jack of all trades type - I have a lot of interests and tend to bounce sporadically from one to another, picking up new ones on the way. Predominantly I make things and read. I do play console games (I think at present I own three four consoles that fight for space), but even then I wouldn’t say I play one type of game more than any other. I’m a big final fantasy fan, but I also like puzzle games and FPS. There are plenty more console games enthusiasts on here though, so I’ll be sticking to reviewing tabletop games. I grew up with a culture of playing board games with my family frequently, especially Hero Quest with my dad. Whenever we have a social gathering, which is usually every other weekend, we inevitably play at least one board game. Then there’s the making of things. My current list of enthusiasms includes crochet, embroidery, clothes making and cosplay, bags, leather work, some jewellry, plushies of all shapes and sizes and some other random bits and pieces. You can read all about my nerd-craft in my blog and if you’re interested and willing to part with some cash, I do take commissions on certain things. If you can think it, I can probably make it out of something - just ask!