A quick post this week to say … I finished the giant zombie bear!! 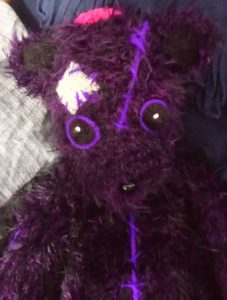 It’s huge, heavy and great for cuddles. I weighted his feet and belly so he’ll stand under his own power. I suspect I’ll be making more of these. I haven’t decided whether to keep this chap or sell him yet … I may make a bunch more and then decide – flagrant favouritism I know, but I think that’s a crafter’s prerogative!

No significant other news – I’m mostly doing prep work ahead of plans for this weekend’s crafting session. All will be revealed in next week’s blog. It’s a brand new medium for me and it’s really cool. Watch this space!

I’m best described as a jack of all trades type - I have a lot of interests and tend to bounce sporadically from one to another, picking up new ones on the way. Predominantly I make things and read. I do play console games (I think at present I own three four consoles that fight for space), but even then I wouldn’t say I play one type of game more than any other. I’m a big final fantasy fan, but I also like puzzle games and FPS. There are plenty more console games enthusiasts on here though, so I’ll be sticking to reviewing tabletop games. I grew up with a culture of playing board games with my family frequently, especially Hero Quest with my dad. Whenever we have a social gathering, which is usually every other weekend, we inevitably play at least one board game. Then there’s the making of things. My current list of enthusiasms includes crochet, embroidery, clothes making and cosplay, bags, leather work, some jewellry, plushies of all shapes and sizes and some other random bits and pieces. You can read all about my nerd-craft in my blog and if you’re interested and willing to part with some cash, I do take commissions on certain things. If you can think it, I can probably make it out of something - just ask!